The library history is a short one that is filled with many people working to move the library and the community one step forward. Please visit the Local History Collections or use the library for more information on their works. 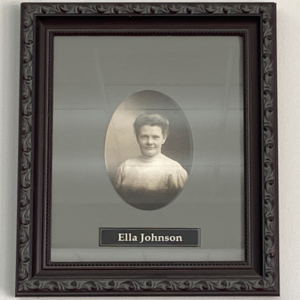 Ella (Farrell) Johnson was born to Thomas and Henrietta Farrell at Dundee on March 4th, 1860. Her family moved to a farm outside of Hampshire in 1868 and moved into Hampshire to start her own millinery business in the early 1880s.

An independent woman, she was briefly married between 1893 and the early 1900s to A. R. Johnson.

It was noted in the 1920s that she had the longest continuously running business in Hampshire, and that she always had a book in her shop. On January 28th, 1935 several friends went to check on her after she missed several meetings and found that she had passed on.

During her life, Ella Johnson supported herself with a business that spanned over 50 years, helped the community and made her corner of the world a better place.

Library history says that this was located in the community room of Hampshire Township High School, the school formerly on N. State St. next to the railroad tracks. One thousand volumes of books were installed and some exchanged at stated intervals with other centers. The librarians, in order of service, were Miss Dorothy Schuld, Mrs. Verne Gates, and Mrs. William Klick. Mrs. Palmer was district librarian of the W.P.A. The library was in charge of a local committee, of which Mrs. George Wilcox was Chairman.

Miss Emma Schulz retired from being a Chicago school teacher and moved back to Hampshire to be near family who still lived in Burlington. She became the Chairman of the Library Committee in 1941, and the following year the W.P.A. library center was discontinued

The library had become so immensely popular while it was a W.P.A. project that the leading citizens decided to find a way to continue the program. The second floor of the town hall would temporarily suit the purpose, and it was offered rent-free.

The nucleus of the library in the new location was 482 books, but townspeople donated many more, and the big problem of the time was solved by using orange crates and old cupboards for bookcases.

Of course, a library must have books, and the Woman’s Club saw to that. While donations continued, cash, through food sales, was raised for new books. The collection grew, and soon, a need for a second move was seen.

A cobbler shop on State Street, which had been formerly occupied by Mrs. Ella Johnson, a milliner for more than 50 years, was chosen as the new site. With a great deal of trepidation, Miss Schulz wrote to the owner of the store asking for a minimum rental charge. The answer was the turning point in the struggle for a library. Mrs. George Watts, the owner who had moved from Hampshire several years previously, presented the lot and the old building as a gift. She also donated $5,000 immediately and a further $10,000 plus real estate was bequeathed upon her death in 1947. The only stipulation was that the library be named the Ella Johnson Memorial Public Library in memory of her sister who had conducted the millinery shop.

The committee again got busy, and a campaign for tax support was launched. In a special election held in February 1943, a tax in support of the library was voted for without a dissenting vote in the township – population 1,450. This was the first time in the State of Illinois that a library levy was passed without any opposing votes.

The climax to years of hard work and struggle came on March 17, 1951 when the library moved into its new quarters on the site of the old cobbler shop. The total cost of the new building was $19,000; the blueprint for the layout was submitted by the Library Bureau, and the contractor was Elmer Ackman of Elgin.

In 1967 the library joined the Northern Illinois Library System.

(Taken largely from the booklet “Hampshire Centennial: A history of the Village of Hampshire, Illinois in commemoration of its founding November 9, 1876”)

Between 1941 and the mid 1990s, three library Directors continued to build the library; namely, Effie Carlisle Farrell (Bertha & Ella’s sister-in-law), Emma Schulz, and Emily Duchaj. Emily Duchaj saw the library move into the southern half of its present location at 109 S. State Street. Jerry McKay expanded the township library into its present district and installed the first computers.