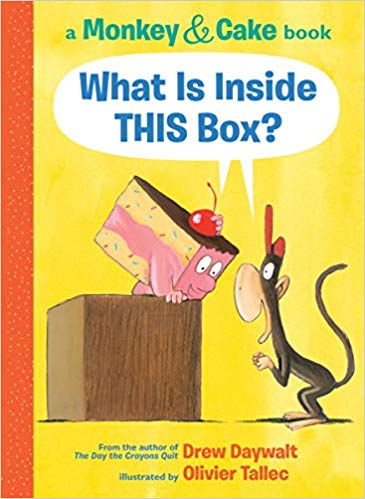 What Is Inside THIS Box? by Drew Daywalt

In this book, Monkey and Cake cannot agree what’s inside Monkey’s mysterious box. Is it a kitty? Is it a dinosaur? How will they find out — and what do you think is inside? (Grades K-2) 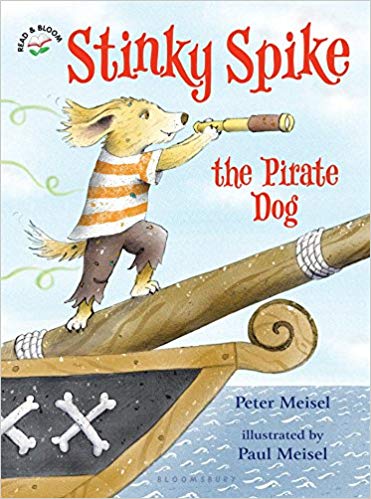 (Grades K-2) Ahoy! When a shipyard pup gets lost at sea, he’s rescued by a crew of stinky pirates led by Captain Fishbeard. Spike must prove to the captain he can be a real pirate. Luckily, Stinky Spike has the best nose on the seven seas, and he uses it to sniff out all kinds of treasure. But what happens when Spike’s sense of smell leads him to some very strange loot? 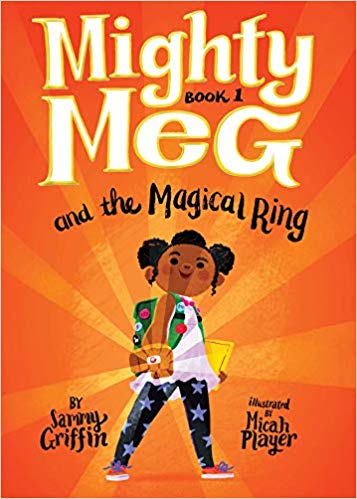 Mighty Meg and the Magical Ring by Sammy Griffin

(Grades 1-3) Meg’s life is turned upside down when a magical ring gives her superpowers! But Meg isn’t the only one who changes. Strange things start happening in her once-normal town, and now Meg must use her brand-new superpowers to keep everyone safe. Can Meg master her new powers and find the courage to be the hero her town needs? 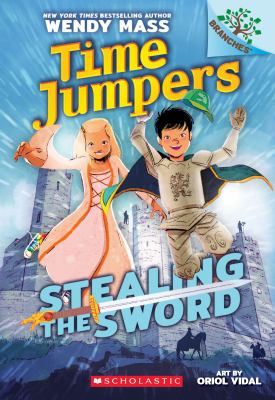 (Grades 1-3) Chase and Ava find an old suitcase filled with strange objects. One of the objects looks like a dragon-headed doorknob… Suddenly Chase and Ava find themselves jumping back in time to King Arthur’s castle! They meet the king’s wizard Merlin and soon discover what the dragon-headed doorknob really is. It turns out they have an important job to do: They must save the king! But a bad guy is after them… How will Chase and Ava get back home? They will need to act fast to find out! 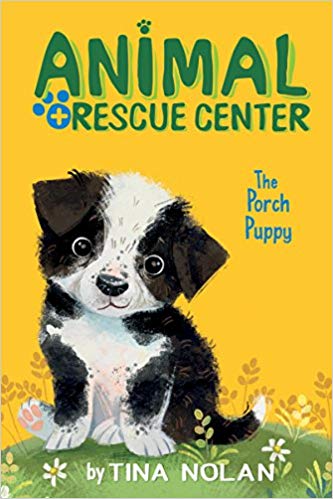 (Grades 1-3) Abandoned…lost…neglected? There’s always a home at Animal Magic! IN a perfect world, there’d be no needs for Animal Magic. But Ella and Caleb Harrison, who live at the animal rescue center with their parents, know that life isn’t perfect. Every day there’s a new arrival in need of their help! When Holly, a beautiful Border collie, is abandoned on the doorstep of Animal Magic on Christmas Eve, it’s up to the team to nurse her back to health. Ella and Caleb set out to investigate where Holly has come from and they uncover a troubling situation… 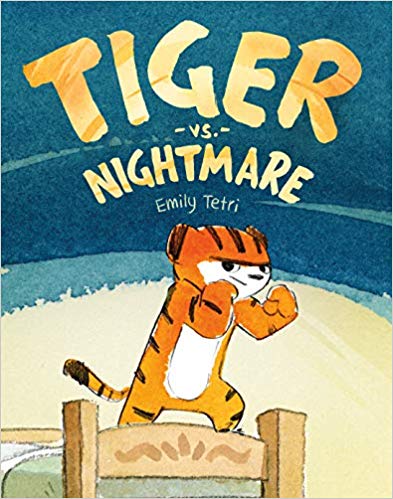 Tiger Vs. Nightmare by Emily Tetri

(Grades 1-4) Tiger is a very lucky kid: she has a monster living under her bed. Every night, Tiger and Monster play games until it’s time for lights out. Of course, Monster would never try to scare Tiger–that’s not what best friends do. But Monster needs to scare someone … it’s a monster, after all. So while Tiger sleeps, Monster scares all of her nightmares away. Thanks to her friend, Tiger has nothing but good dreams. But waiting in the darkness is a nightmare so big and mean that Monster can’t fight it alone. Only teamwork and a lot of bravery can chase this nightmare away. 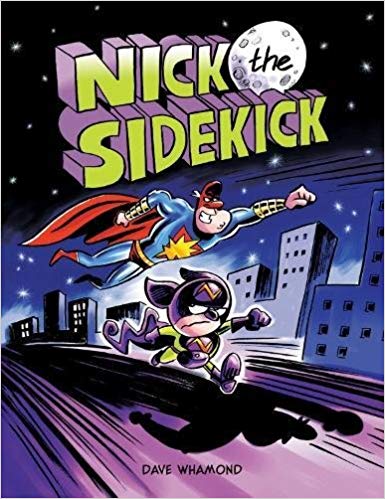 Nick the Sidekick by Dave Whamond

(Grades 1-4) When Nick signed up to be a superhero, it seemed like a terrific idea. He was flattered to be chosen by Super Fantastic Guy – picked for his intelligence, his investigative skills and his super-amazing hearing abilities. But as Super Fantastic Guy’s assistant, Nick (who, by the way, hates being called a sidekick) didn’t realize that he would have to do all of the work – and get none of the credit. All Nick wants is an opportunity to prove himself. So, when he overhears a group of criminals planning an enormous bank heist, he knows his big chance to save the day has finally arrived. Or has it? 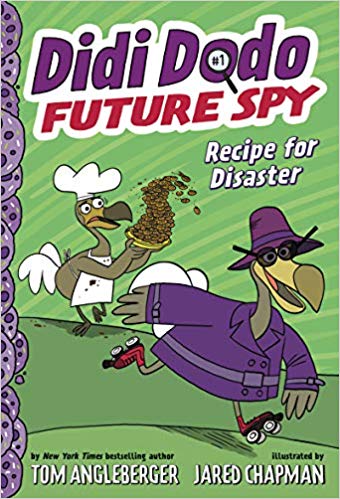 Meet Didi Dodo. She’s a dodo and a spy. Or she will be, once she’s hired!

Meet Koko Dodo. He’s a dodo and a baker. He gives Didi Dodo her first case!

When Koko Dodo’s secret chocolate sauce is stolen just before an important cooking contest Didi, a dodo bird, devises a daring plan to help–whether he wants her to or not. (Grades 1-4) 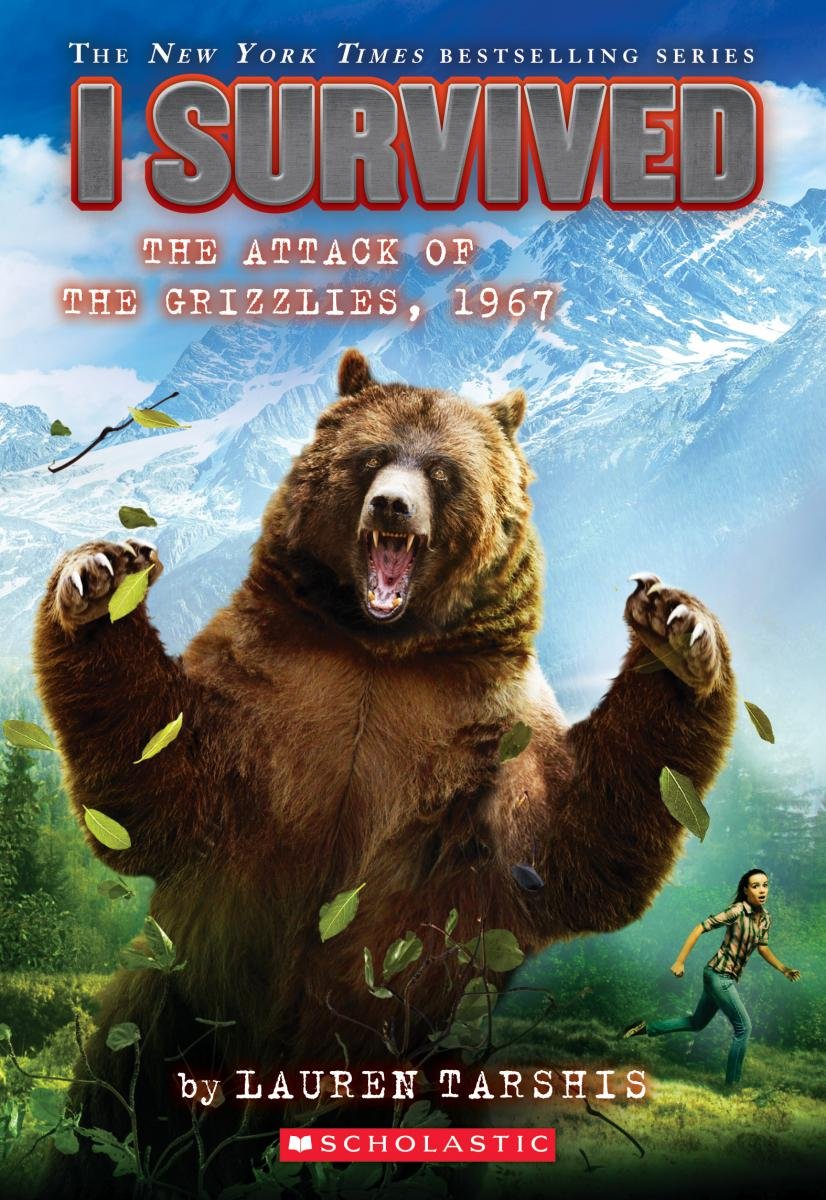 I Survived The Attack of the Grizzlies, 1967 by Lauren Tarshis

(Grades 3-7) No grizzly has ever killed a human in Glacier before . . . until tonight. Eleven-year-old Melody Vega and her family come to Glacier National Park every year, and it’s always been a place where she can forget her troubles. But this year is different. With Mom gone, every moment in the park is a heartbreaking reminder of the past. Then Mel comes face-to-face with the mighty grizzly. Now her only thought is one of survival. Mel will soon be a part of one of the most tragic seasons in the history of America’s national parks – a summer of terror that will forever change ideas about how grizzlies and humans can exist together in the wild. 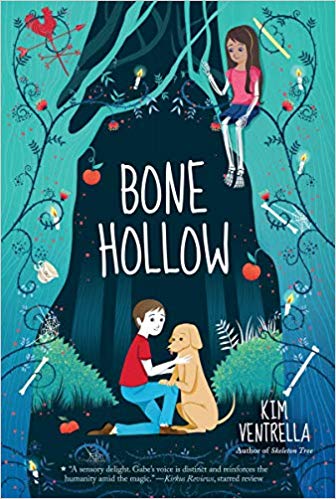 (Grades 3-7) Gabe knows it was foolish to save that chicken. On the roof. In the middle of a storm. Yet Gabe also knows that his guardian, Ms. Cleo, loves the chicken more than him. After falling off the roof, Gabe wakes up to find his neighbors staring at him tearfully. To his confusion, none of them seem to hear Gabe speak. It’s almost as if they think he’s dead. But Gabe’s NOT dead. He feels fine! So why does everyone scream in terror when he shows up to his own funeral?

Gabe flees with his dog, Ollie, the only creature who doesn’t tremble at the sight of him. So when a mysterious girl named Wynne offers to let Gabe stay at her cozy house in a misty clearing, he gratefully accepts. Yet Wynne disappears from Bone Hollow for long stretches of time, and when a suspicious Gabe follows her, he makes a mind-blowing discovery. Wynne is Death and has been for thousands of years. Even more shocking . . . she’s convinced that Gabe is destined to replace her. 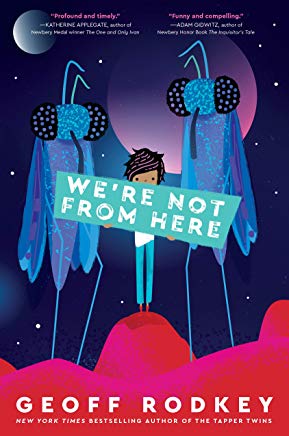 We’re Not From Here by Geoff Rodkey

(Grades 3-7) The first time I heard about Planet Choom, we’d been on Mars for almost a year. But life on the Mars station was grim, and since Earth was no longer an option (we may have blown it up), it was time to find a new home.

That’s how we ended up on Choom with the Zhuri. They’re very smart. They also look like giant mosquitos. But that’s not why it’s so hard to live here. There’s a lot that the Zhuri don’t like: singing (just ask my sister, Ila), comedy (one joke got me sent to the principal’s office), or any kind of emotion. The biggest problem, though? The Zhuri don’t like us. And if humankind is going to survive, it’s up to my family to change their minds. No pressure. 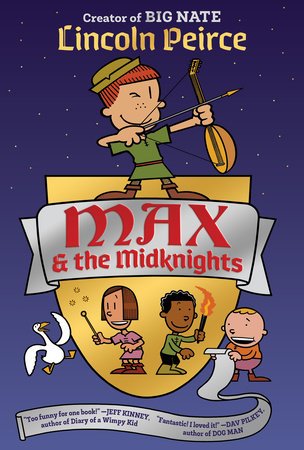 Max and the Midknights by Lincoln Pearce

(Grades 3-7) Max wants to be a knight! Too bad that dream is about as likely as finding a friendly dragon. But when Max’s uncle Budrick is kidnapped by the cruel King Gastley, Max has to act…and fast! Joined by a band of brave adventurers–the Midknights–Max sets out on a thrilling quest: to save Uncle Budrick and restore the realm of Byjovia to its former high spirits! 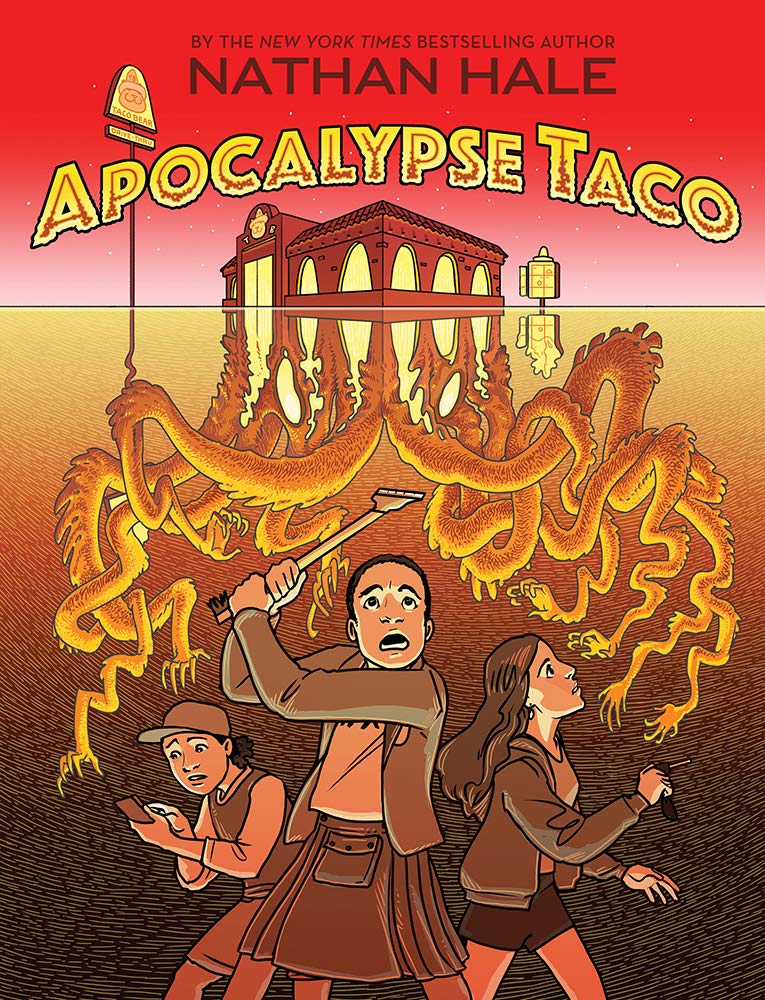 (Grades 3-7) It’s the night before dress rehearsal, and the school theater troupe is working late and they’re very hungry. Eleven-year-old twins Axl and Ivan – along with their sixteen-year-old driver, Sid- volunteer to make a late-night fast-food run. At the drive-through, their tacos start to…move. And they don’t seem friendly. Even after they get rid of the food, the world around them isn’t quite right. There are strangely moving cars, buildings, and people- and they seem intent on swallowing everything in their path. Now the trio will have to use their wits, their truck, and even their windshield scraper to escape…before they’re replaced by monstrous versions of themselves! 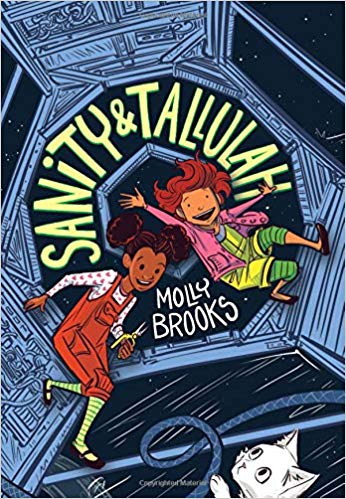 Sanity and Tallulah by Molly Brooks

(Grades 3-7) It can get pretty dull living on a small, out-of-the-way space station like Wilnick SS. Best friends Sanity Jones and Tallulah Vega do their best to relieve the monotony of everyday space life by finding adventures, solving mysteries, and taking turns getting each other into and out of trouble. But when Sanity’s latest science project- an extremely illegal but impossibly cute three-headed kitten- escapes from the lab and starts causing havoc, the girls will have to turn the station upside down to find her- before the damage becomes irreversible! Can they save their home before it’s too late? 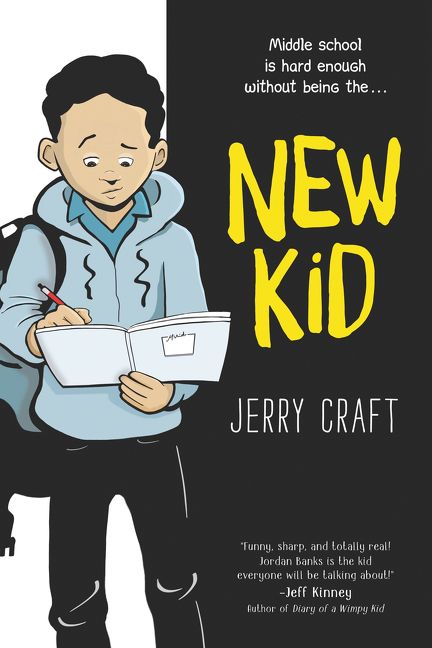 (Grades 3-7) Seventh grader Jordan Banks loves nothing more than drawing cartoons about his life. But instead of sending him to the art school of his dreams, his parents enroll him in a prestigious private school known for its academics, where Jordan is one of the few kids of color in his entire grade.

As he makes the daily trip from his Washington Heights apartment to the upscale Riverdale Academy Day School, Jordan soon finds himself torn between two worlds–and not really fitting into either one. Can Jordan learn to navigate his new school culture while keeping his neighborhood friends and staying true to himself? 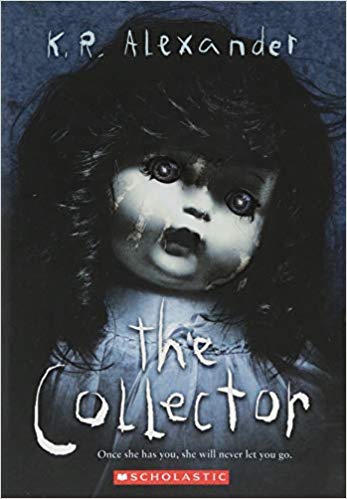 The Collector by K.R. Alexander

(Grades 4-7) Josie always liked visiting her grandmother’s house. But when she’s forced to move there, she starts to feel like something is a little…off. Her grandmother has some very strange rules:

A little spooked, Josie is relieved to find that her school seems pretty normal. She even manages to make friends with a popular girl named Vanessa. When Vanessa invites Josie back to her house to hang out, Josie doesn’t question it. Not even when Vanessa takes her into the woods and down an old dirt road, toward the very house her grandmother had warned her about….

The house that has been calling for her.