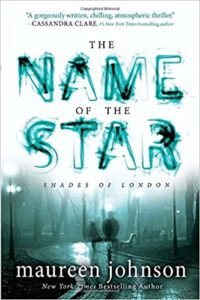 The Name of the Star is the first book in a thrilling series by Maureen Johnson. Rory Deveaux is a Southern girl living in England for her senior year when the first kill shakes the country. Someone has been imitating Jack the Ripper’s kills, getting every detail as close as possible. The problem is the impersonator seems to be   impossible to catch. Rory and her friends have to figure out who this new “Jack the Ripper” is and just what his deal is. Join this ragtag group of teenagers in this intriguing mystery as they race against the clock to   defeat this terrifying villain