The Ape in the Corner Office: How to Make Friends, Win Fights and Work Smarter by Understanding Human Nature by Richard Conniff 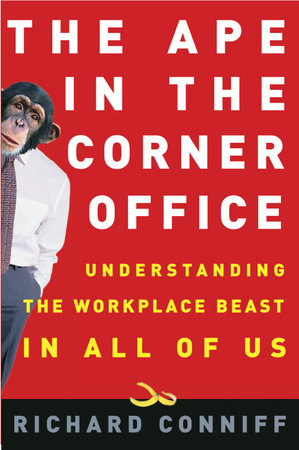 Power is central in human relationships, and it’s only in the context of groups and relationships that we become fully human, sorry Ayn Rand. But the characteristic error of our time is that people think we are rational beings, not animals, that we are in control of our post ideological world. But in fact we are just monkeys who one day put on a hat. We experience so much stress and anxiety at work because much like animals in a zoo the workplace is an unnatural environment. The approach/inhibit theory of power states that we approach or challenge when we are able and retreat when we are at a disadvantage, falling back into the hierarchy until next time. It’s a safe place to hide and having a strong social game allows people the opportunity to live long enough to pass on their genes. So we live in artificial environments ruled by strict rules of hierarchy. To mitigate that we need to be strategically altruistic. The authors one main argument is that nature built us to be nice, in other words show proper deference towards those with power. No society is egalitarian. You can never escape the pecking order all you can do is try to limit the number of pecks. We re-create the highly codified hierarchies of the playground wherever we go for the rest of our lives. The hierarchy exists to ensure domestic tranquility. If you think your not a part of a hierarchy it’s merely invisible. Hierarchies work the same reason bureaucracies work, it’s the easiest way to manage groups of people, they pretty much organize themselves in this way. But hierarchies exist or are tolerated because it keeps those with less resources safe. We are unselfish animals in the sense that we do good for others but usually only for selfish reasons, in other words we are unselfish for selfish reasons. Almost all of our aggression now gets channeled into symbolic forms. Meetings are ceremonies to reinforce the hierarchy, to remind people who’s boss, and to praise or chastise anyone who isn’t. Small talk is way to check and see that the social order is still in tact. The answer to the question, “How are you today?” isn’t supposed to be answered honestly, what your boss is looking for is your tone of voice in giving your response. We groom each other with our words now. Grooming behavior itself evolved into language and gossip is a form of grooming, it’s also a strategy for coalition building among subordinates and its used to level the power imbalance and one of the main functions of gossip in any workplace is to communicate the unspoken rules. According to the anthropologist Robin Dunbar, its the only reason we evolved speech in the first place. Smart managers encourage gossip, weak managers obstruct it. Office politics itself is in fact just primate politics. Political maneuvering follows the same rules of the jungle. It’s surprising how little of our own behavior has advanced beyond that of our fellow apes.