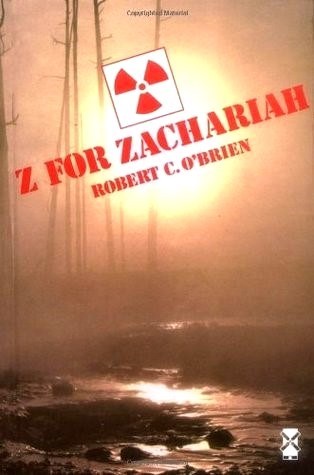 Z for Zachariah is an inversion of the Adam and Eve story, one where Loomis is portrayed as the snake in the garden: a murderer, a would-be rapist and a usurper of land. He is “the last man on earth”, desperate to prevail and procreate. The title of the book derives its name from an alphabet book Ann used while learning to read. A is for Adam, etc. “I learned the alphabet from a picture book called The Bible Letter Book. The last page of all was “Z is for Zachariah,” and since I knew that Adam was the first man, for a long time I assumed that Zachariah must be the last man.” Biblical symbolism threads throughout the narrative, but rather than being didactic, it consists of an uneasy seesawing of power between two characters and in some ways, functions as a story of awakening for Ann, much like Eve in the garden of Eden. The story itself seems to have been largely misinterpreted by many reviewers however, mostly because of a common failure to recognize that Ann Burden is an unreliable narrator whose viewpoint is biased, paranoid, and highly irrational. Her fear of John Loomis is unfounded, arising from naive and self-centered thinking. Fear causes her to suppress sympathy and the desire for companionship, her social instincts, ultimately making her flee from the last surviving man and doom humanity to extinction. Z is not really about personal survival at all but about the need for people to overcome biased egotism and help one another in order to survive as a species. This need should be increasingly apparent in our own time especially, since people continue to struggle with the basic problems of understanding one another.